0 shares
Ask almost any senior executive about their secretary, and most would say they wouldn’t be able to live without him or her. Some may even go as far as to say that their secretaries unofficially run the office behind the scenes. However, with the plethora of different responsibilities that a secretary can undertake, what actually makes a good secretary?
We asked both secretaries and hiring managers what they feel contributes to being a great secretary.
The following key traits list was compiled from all their insightful feedback:

1. Communication skills
Being able to effectively communicate with one’s boss is vital, but in addition, a secretary can often be the first point of contact for clients, stakeholders and business partners. Having professional, clear and effective communication skills not only ensure nothing gets “lost in translation”, but also gives a strong impression of the boss and the company.
2. Organisational knowledge
A deep understanding of the inner-workings of the company, the people in it and their corresponding relationships allow a great secretary to know who to turn to when additional help is required. A good secretary also knows how to make use of this knowledge and her internal networks to maintain diplomatic relationships across the company. An added bonus of this organisational knowledge is the ability to act as the “eyes and ears” for the boss, as he or she is often no longer right in the middle of the hustle-and-bustle of the office floor.
3. Independence
A boss in a very senior position can often be surrounded by “yes people” – which can often lead to the boss being isolated from reality. A great secretary needs to have the courage (and sense) to tell the boss “NO” when it is called for. Bosses can often be travelling or stuck in back-to-back meetings, leaving the secretary to work on their own. Hence, a good secretary is someone who can work independently and has the confidence to make decisions without the constant need to seek approval from his/her boss. 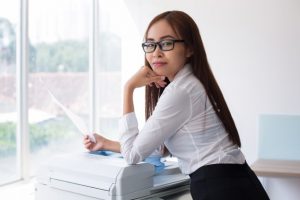 4. Planning skills
Important meetings, last minute flights, off-site team-building activities are just a few of the challenging tasks a secretary will need to organise on a regular basis. Bosses often won’t have time to plan these events so secretaries with excellent planning skills are highly sought-after as these activities, if planned poorly, can have negative repercussions – for both internal and external stakeholders.
5. Detail-oriented
Missing even the smallest detail can often ruin the most well-planned schedule or event. With senior leaders having such high-involvement in the day-to-day operations of their respective businesses, sometimes a minor error or oversight can have a severe impact on the boss’ day, or even on the business itself. As a result, being highly meticulous with a consistent attention to detail are highly rated by many employers and senior executives as some of the most critical traits for a top secretary.
6. Commitment
Commitment can often be overlooked but the best secretaries typically remain fiercely loyal to their bosses, some even to the extent of following their bosses when they have been posted overseas. Bosses are highly appreciative of secretaries who are committed, dedicated and has a strong sense of loyalty.
0 shares